Instead of giving in to polio, iftkhar ali worked hard to get admitted into iim-c and start a company of his own 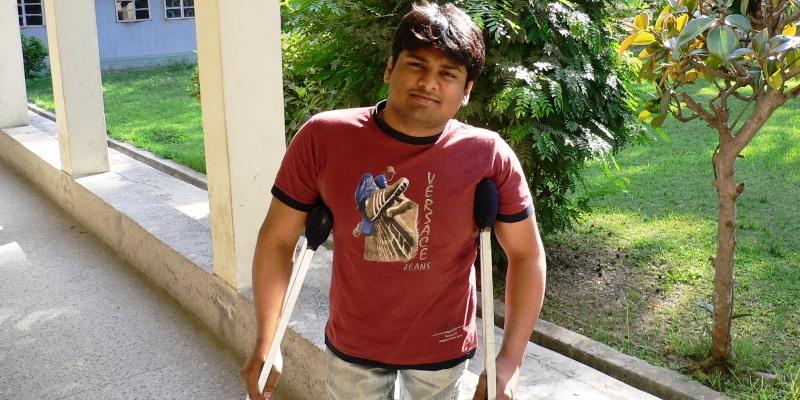 The fruits are never hanging low for some people. For them, even simple acts such as getting out of the bed on their own or being able to walk the perfect way is very difficult. But those, who instead of surrendering to their misfortunes take them as a challenge and overcome their disabilities, are the ones who are applauded as the true heroes.

Iftkhar Ali heard a similar applaud in an auditorium full of his fellow mates and their families when he won over his disabilities and against all odds, graduated from Indian Institute of Management (IIM) Calcutta.

Iftkhar, today the founder of a New Delhi based startup called ALIQAN Technologies, hails from the city of Agra. He was diagnosed with polio at the very young age of one and since then, life has never been easy for him. Ali wanted to pursue medicine as career, but Polio came as a precursor of rejection. He was dictated not to dream too big.

Post his bachelors education, he was an employee of HCL and TCS where he worked as a business analyst. He was also the Centre Operational Head for IMS India, and later led the operations for an IT company. Owing to his entrepreneurial thinking, he was not someone who would settle down in the comfortable corporate life. This is what led Ali to work on his own venture.

The path of entrepreneurship is never easy for anyone and Ali had a whole different set of challenges for himself. He wanted to change career paths and decided to prepare for CAT. Agra being a small city lacked the guidance he was expecting to clear the exam. People around him discouraged Ali to even try for CAT.

Overcoming all the negativity and discouraging comments, Ali cracked CAT in his first attempt and scored calls from IIM Calcutta and Kozhikode. However, he couldn’t clear the interviews. He started preparing for the exams again even after accepting an admission in University Business School, Chandigarh. This time, he scored calls from all the IIMs and chose IIM Calcutta.

Iftkhar Ali believes that difficulties arising out of any kind of disability is majorly a result of one’s mindset and just like a mindset, it can be changed. He mentions that his parents are his strongest support and back all of his decisions unconditionally, encouraged him to fall to his disability and told him that he can achieve biggest of his goals in his life. Ali has named his IT solutions company ALIQAN after his parents. IT Giants such as Wipro, HCL and other big organisations like The Football Link, Shiv Nadar Foundation, Airwhizz and Allizhealth along with Indian Air Force count as ALIQAN clients.

But Ali is not going to stop here. He wishes to start scaling up operations in his services and wants to launch two more product companies. He also wants to enter in the educational industry. His main purpose has always been to make people with disabilities independent.